Only very few people have never heard of Ramadan, but that doesn’t mean that everyone actually understands it, or knows anything about it aside from the fact that Muslims might seem a little less active than usual. Still, since it is a month that greatly affects about a fifth of the world population, it might be a good plan to educate ourselves on what exactly Ramadan is. After all, during my time in Bahrain, finding myself in a house full of Muslims in an Islamic country, I found out that Ramadan doesn’t quite work the way we might think in the West.

First of all, the basics: Ramadan is the ninth month of the Islamic lunar calendar, and it is seen as a holy month due to the fact that the Quran was first revealed to Prophet Muhammad during this month. Muslims observe this month by fasting during the day, something the Prophet himself did as well, abstaining not only from food, but also from sex, smoking and even water. Yes, you read that right: no water, even if you live in a desert in the Middle East. More on that later.

The entire thing becomes a bit more complex when you start talking about the start of Ramadan. See, the Islamic calendar is a lunar one, so not only does the date of Ramadan change by approximately 11 days every year, slowly moving through the seasons, but its beginning is based on the standing of the moon, and that isn’t always fully predictable. Specifically, Ramadan starts when the crescent moon is sighted, and it ends with the new moon after 29-30 days (a day that is called Eid). A difference of opinion exists, however, about how to determine this. Some use a Saudi Arabian declaration that is based on prior calculations, others use the sighting of the crescent moon itself. As an example, at 1 AM on the 28th of June (2014) my Islamic friends in Bahrain were still unsure about whether or not they would be fasting the next morning. It later appeared that Ramadan would start on the 29th, but the doubt was there until very late at night.

Either way, once Ramadan starts, Muslims are not allowed to eat, drink, smoke or have sex during the day, although other things are often added such as not getting into arguments or swearing. For instance, in case you thought not eating for 12 hours was impressive, I had the honour of watching a fasting friend in Bahrain play multiple Fifa 14 matches, and losing, without swearing even once. Now THAT is impressive.

One thing that might need some more explanation, though, is the term “during the day”. “The day” ends when the sun has gone down, so when it’s still relatively light outside but when the sun itself is no longer visible on the horizon, at which point Muslims break the fast with a meal called Iftar, often starting by eating dates, just like Prophet Muhammad did. It starts again when the sun comes up, before which Muslims all over the world have “Suhoor”, the last meal before fasting again.

However, the “all over the world” thing is slightly problematic  as well… See, as some of you might know, the earth is round, and that not only means that when the sun is up in Bahrain, it’s down in Tokyo, but it also means that there are places in the world where the sun doesn’t go down at all for a very long time. Being a practising Muslim in Qaanaaq, Greenland is a little problematic when the sun is up 24/7 from the 21st of April until the 22nd of August. It means that if Ramadan falls in the summer, they wouldn’t be eating nor drinking for 30 days, which is going to make it very difficult to pray 5 times a day. Or to do anything else ever again, for that matter…

But the main thing people in the West misunderstand about Ramadan, is that it isn’t just about the not-eating and drinking. Sure, it is incredibly impressive and good for your discipline to spend a day on excursion through Bahrain, visiting a zoo and a desert even though it’s 50 degrees, all without drinking any water, but there is much more to it. Ramadan is a month of reflection, of spiritual strengthening. Muslims are extra involved in their religion, in their role as a spiritual being, and that makes it not a month of difficulty that has to be survived, but a month of celebration. Ramadan is a month which Muslims look forward to rather than one they fear or look up to, and that, to me, is even more impressive and inspiring.

Of course, that doesn’t mean that they wouldn’t appreciate some support. Particularly in non-Islamic countries, fasting isn’t easy, because while in the Middle East the daily schedule can at least be slightly adjusted, in the West, it’s difficult to eat at 3 AM if you have to get up again at 6 to go to work. Living more at night is not an option since sleep is vital as well, not to even mention the fact that in the summer, most places in the West see the sun go down a whole lot later than in the more traditionally Islamic countries. Some kindness and understanding, therefore, can go a long way, just as long as you do remember that Ramadan is a blessing, and not a curse. 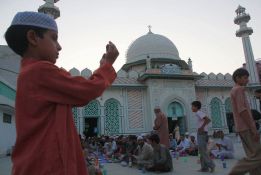 Muslims before the evening prayers on the first day of Ramadan

Any cookies that may not be particularly necessary for the website to function and is used specifically to collect user personal data via analytics, ads, other embedded contents are termed as non-necessary cookies. It is mandatory to procure user consent prior to running these cookies on your website.